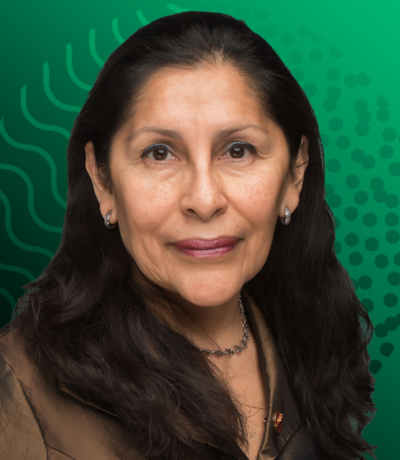 The Honourable Rosa Galvez is an environmental engineer, an independent senator at the Senate of Canada, and the President of the Parliamentary Network on Climate Change of ParlAmericas. She was a professor at Laval University in Québec for over 25 years and was Chair of its Civil and Water Engineering department from 2011 to 2016. She specializes in pollution control, water and wastewater treatment, municipal and hazardous waste, sustainable development, impact assessment and climate risk to infrastructure.

At the Senate of Canada, she is a member of the Standing Senate Committee on National Finance and the Senate Standing Committee on Energy, the Environment and Natural Resources which she chaired during the 42nd Parliament. In 2021, she was the sponsor in the Senate of the Canadian Net-Zero Emissions Accountability Act, providing an accountability framework for the Canadian federal government to achieve its net-zero emissions goal by 2050. She was also recipient of the Clean50 Award 2021 for her parliamentary work on climate and the environment.

Since her appointment at the Senate, Senator Galvez has published several policy papers including a discussion paper on Canada’s building codes and a white paper on a clean and just recovery from the COVID-19 pandemic. In March 2022, she published a white paper on Aligning Canadian Finance with Climate Commitments, which led to the introduction in the Senate of Bill S-243, the Climate-Aligned Finance Act, legislation to help guide Canada’s financial sector in its transition to a net-zero economy.