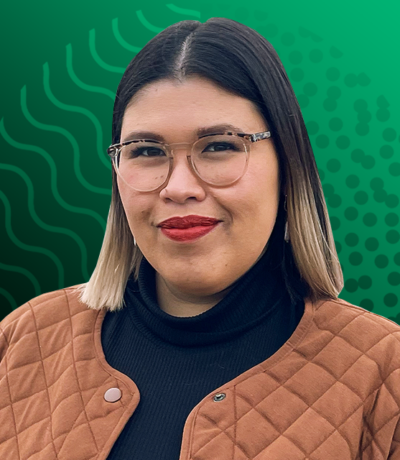 Born and raised in Mississauga, Ontario, Stephanie Lipp has always had an eye for beauty and a thirst for adventure. After receiving an education in art and photography, Stephanie worked for some of the top commercial photographers in Canada. She continued to flex her creative muscles and was commissioned to do fashion portraiture, graphic design and digital marketing. After several years of working in the arts, she switched gears and became a property manager at a non-profit but after working in this field for several years, she missed the world of creativity and leading-edge ideas. That’s when Stephanie and her partner Leo started their own gourmet mushroom farm and moved to the island of Newfoundland – one of the most creative places in North America. After participating in a pre-accelerator, Stephanie and Leo made a big pivot and co-founded a cleantech company that produces a mycelium-based leather alternative. Stephanie has come full circle, combining her passion for creativity and entrepreneurship, to create a circular solution that will be used by big brands all over the world.

As co-founder of MycoFutures North Atlantic, Stephanie has participated in Genesis Evolution and soon after won first place in the 2021 Bioinnovation Challenge Pitch Competition and Bounce Health Innovation Pitch Competition Biotech category. Stephanie has also represented the venture in podcast interviews, panel discussions and at this year’s Collision Conference, delivering three presentations during the event. Stephanie is particularly excited about being selected for the MaRS Women in Cleantech Accelerator Cohort 2024 and Creative Destruction Lab – Atlantic Prime Stream.